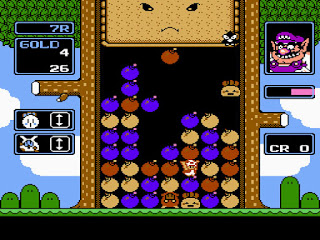 And then, in December of 1994, it ended. The writing had been on the wall for a while - the last releases had been all the way back in August (Disney’s The Jungle Book, The Flintstones: Surprise at Dinosaur Park, and The Incredible Crash Test Dummies), but Wario’s Woods was the last licensed game for the Nintendo Entertainment System.

The history of the game is slightly strange. It came out in Japan in February of 1994, the sixth-from-last game for the Famicom. That it should come out in a different order in the US isn’t strange, of course. What is strange is that it came out alongside a SNES version that never saw Japanese release. On top of that, the SNES version was slightly more elaborate, introducing a handful of new mechanics absent in the 8-Bit version. The result is that, when looked at from a 1994 perspective, without the ability to simply summon up a production history of the game from the Internet, the last NES game looks like a stripped down port of a Super Nintendo game, which, given the amount of stuff that was coming out in both NES and SNES versions at the time, was an entirely plausible interpretation.

And yet in practical terms the SNES version is irrelevant. The game’s claim to historical significance is entirely that it was the last NES game. It’s been released in emulation for four separate Nintendo systems, including as a launch title for the Wii’s Virtual Console, and every time it’s been the NES version. In spite of the fact that the SNES version is prettier and more feature-rich, which, by most definitions at least, means that it’s “better.” (In reality one of the features is a randomly appearing block that screws the player over arbitrarily by provoking a flood of blocks when it lands, and the game is better off without it, but that’s neither here nor there.)

As last games go, though, it’s a pretty good one. The list of classic falling block games is fairly short - indeed, it’s about six letters long, and two of them are T. (No, Dr. Mario is not a classic falling block game - its mechanics are dreadful.) Wario’s Woods isn’t quite classic - the difficulty curve is wonky, and the latter levels are far too dependent on the luck of block distribution. But it’s got an addictive charm to it. The conceit of controlling a character running around amidst the falling blocks and rearranging them is interesting, changing the dynamic from the Tetris-standard “move blocks as they fall” to one where you usually have a several step plan in mind, but have to execute it among shifting circumstances that may require revision of the plan. You have just enough different ways of interacting with the blocks (pick up/put down one, pick up/put down all, jump to the top of whatever stack you’re holding, and kick the block in front of you) to allow for complex tactics, and more to the point to allow for a real learning process about tactics as you go.

And of course it would be a lot to ask for the last NES game to be an outright classic. To call the NES in decline in 1994 all but misses the point. Its continued status as a thing was largely down to the class striations of the video game market - a low-cost option for families that couldn’t afford the Super Nintendo. Its reason for existence was specifically to be not as good as the SNES. In that regard, the fact that the final game is a credible lesser classic has to be taken as an unexpected bonus - a last hurrah that in no way had to happen. And it didn’t really for any subsequent consoles. The last Super Nintendo game was Timon & Pumbaa’s Jungle Games; the last Nintendo 64 game was a Tony Hawk title. Even the last Nintendo-published titles for the consoles don’t have the odd posthumous status of Wario’s Woods. Kirby’s Dream Land 3 eventually made it out on the Virtual Console, but all the way in 2009; Dr. Mario 64 has never seen rerelease.

And it is, in many ways, this latter life that is most interesting about Wario’s Woods. By definition, after all, it could not be a game with much impact in its time. Perhaps it’s a game that never had impact in any time. It’s not like I have sales figures in front of me or anything. But its long afterlife gives it, if nothing else, an opportunity for impact. Or perhaps I’m just talking around the fact that this is a game I’ve fallen for hard, and more than once. I think it was actually the Wii game I played the most at first, which was admittedly easy given that the Wii launch titles were mostly pretty shit. Wii Sports entertained for a week or two, but Twilight Princess was a lesser Zelda to say the least, and past that the initial slate aspired to mediocrity.
Which left the Virtual Console, which wasn’t exactly long on classics either to start. Donkey Kong and The Legend of Zelda were the two A-list NES games, with Mario Bros, Pinball, Soccer, and Solomon’s Key rounding out the launch. The SNES had F-Zero and SimCity, the Nintendo 64 Super Mario 64, and the Genesis Altered Beast and Sonic the Hedgehog. In other words, a list of games consisting of things I’d either played tons of times before and things nobody cared about. Plus Wario’s Woods.

And so I fell down a rabbit hole. My first NES-based rabbit hole in years, actually. It was in no way my first serious dip into retrogaming, but that’s another story and another blog. All the same, though, it was a good rabbit hole, with hours spent on the sofa diligently grinding away at the upper levels. Which were frustrating in that classical video game sense that made you want to hurl the controller violently through the television.

There’s not a ton to capture about this experience that I haven’t already recounted. There’s definitely a point in the game’s progression where it suddenly becomes much harder, and the dumb luck of what order things fall in becomes absolutely crucial. One short stretch of bad luck early on or a small error in block placement can effectively doom you. So the potential for anger is there - when the game gets into its upper reaches death often feels capricious and unfair, not least because 1-Ups are few and far between at that point, and reaching a new continue point requires beating five consecutive levels, which makes the fact that you start with zero extra lives deeply harsh. But the actual thrill of play - running around inside the level setting things up - and the elegance of design whereby big chains of blocks can be set up and destroyed with a reasonably good plan remained captivating enough to glue me to the couch for a week or two. And I’ve had at least two relapses in the decade since, one of which has been gloriously unhelpful in getting this post done.

But perhaps looking for an explanation is the wrong way to go about it. Perhaps a rabbit hole can only be explained in terms of possibility, and the only question that can be asked of a game is whether it’s good enough to create one, not how or why it did. Wario’s Woods has what it takes, yes. But nothing necessarily follows from that. The fact that it enthralled me gives it a certain weight and heft, but  is not itself content.

Let us, then, approach the basics - a simple dualism implicit in the title. On the one hand, Wario - a mocking perversion of Nintendo’s mascot. If this were another blog, you’d even call him qlippothic. This is his sole appearance on the NES, having debuted on the Game Boy two years prior, and there is something strange about him plowing onto the scene here, at the end of things. A strangely atavistic impulse - an instinctive and barely explicable desire to end on an unsettled note. Even more revealing is the fact that Wario is the title attraction and most prominent figure on the cover, despite the fact that it’s Toad’s game. It is as though there is, in the final moments, an urge to tear down, embracing the negation of all that the brand stands for. Taken in the context of larger industry trends, it is as savvy as it is disturbing.

On the other, Woods. Being a concept with millennia of history as opposed to two years, they are rather tricker than Wario. But broadly speaking, words like “mysterious,” “forbidden,” and perhaps even “libidinous” seem apropos. Forests are things to be explored, or better yet to be lost within. They are where magic and discovery take place. They are fraught with possibility. It would be overstating the case to say that these two words conflict, but there is a tension here between the vast possibilities offered by “Woods” and the strange collapse offered by “Wario.”


But if we are to approach this tension from the perspective of history, it is, at least, clearly resolved. In 1994, it was Wario that held sway: the collapse of the NES into technological obsolescence, the rise of Nemesis, and the sense of Nintendo as something rotting away into history. And yet in hindsight, for better or for worse, the NES did not rot. It survived, through emulation, retrogaming, and an endless program of rereleases. And Wario’s Woods proved in practice not a tombstone for the NES, but the door to the vast future it opened onto.
Posted by Elizabeth Sandifer at 11:24 PM

Elizabeth Sandifer
A hopeless geek with a PhD in English focusing on media studies.

By the Same Author